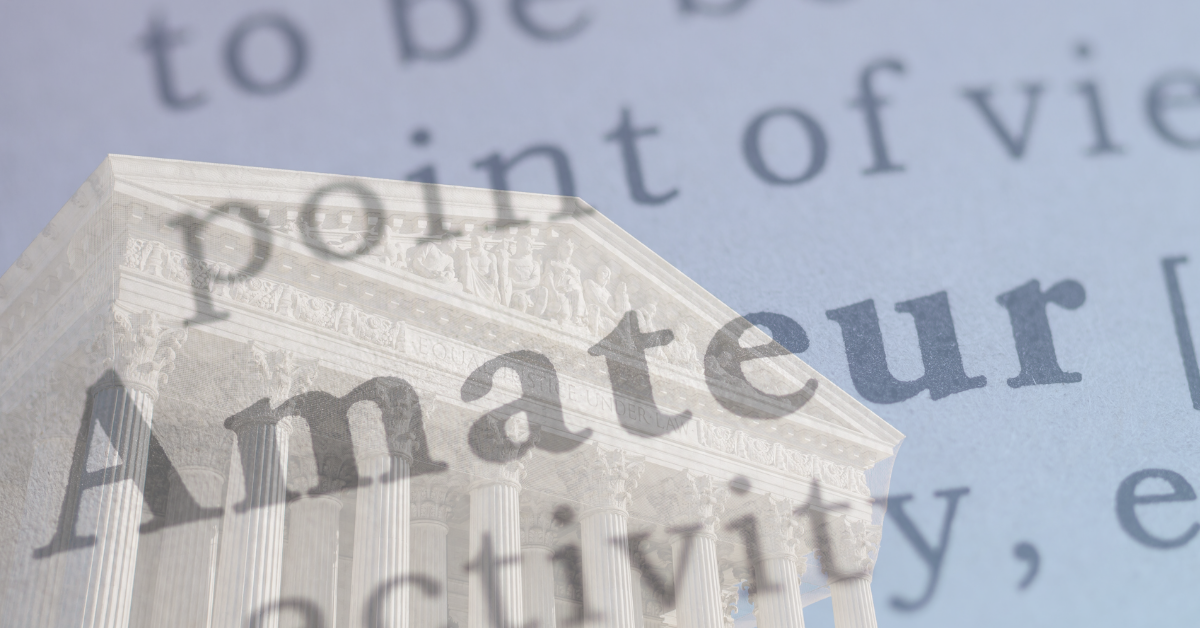 This decision potentially opens the door for athletes to gain an easier path to being compensated for their NIL (name, image, likeness)

Brought to you by
Issa Hall
on
September 25, 2022
Category:
News

Why is this important?

This decision potentially opens the door for athletes to gain an easier path to being compensated for their NIL (name, image, likeness) which the NCAA currently owns and licenses with impunity.  Athletes would immediately get closer to accessing the massive profits currently being generated from their activities.

There are nearly half a million NCAA athletes and the decision in NCAA v. Alston will have widespread ramifications for each one.

The amount of “education-based” benefits athletes may receive under the current definition of amateurism would change.  Everything is currently done under the cover of amateurism, and under this definition the NCAA basically may use the NIL of athletes, and punish the use by athletes of their individual name, image, and likeness.

Even further, these rules severely limit the ways in which athletes may receive compensation of any form.  Many aren’t able to operate businesses or sell things they own due to the threat of the real and actual punishment of ineligibility and the crushing of their dreams as a result of receiving compensation.

Why does this matter?

The current definition of amateurism is modeled around a system that cites fairness and the spirit of competition as the basis for its existence.  Currently education-based benefits that are restricted and capped provide the basis for how athletes receive scholarships.  None of this has allowed athletes to be compensated for their NIL.

The fears cited by the NCAA include the abuse of unlimited payments and how a system incentivized by greater profits will destroy amateurism.  This theoretically would promote a system where colleges and universities bid to attract athletes which means the rich get richer AND…

Instead of being forced to deal strictly with the University, athletes would now be eligible to receive payments directly which reduces the profit share of the NCAA.

Will the NCAA be ruined and is it fair?

The good news is that we don’t have to look far to see how an open market system could successfully operate.  We can look directly at professional sports.  Blueprints already exist to collectively bargain disputes, for revenue sharing, for player unions and associations, and organized operations.

When there’s billions at stake there’s  plenty of resources and incentives to work out a resolution. The current system is outdated and more increasingly being viewed as unfair and exploitative of student athletes.  We don’t disagree.

Why does this matter?

Profits that used to solely benefit the NCAA and its members will now be shared with athletes.  This is potentially billions of dollars that used to be completely diverted away from athletes.  The NCAA and its member organizations have not had to share the billions in revenue generated by athletes.  The alternative is that athletes would have access to this which could shift the trajectory and outcome of their careers and families for generations to come.  Most NCAA athletes don’t become professional athletes, so their time playing for the NCAA is also the apex of their earning potential.

Jersey Sponsor’s position on every matter is to ask ourselves, “what is in the best interest of athletes” and we always strictly adhere to this principle when making decisions.  Athletes should be compensated and education is important and there’s much room for compromise.

In the USA, individual freedoms and liberties are celebrated.  When combined with capitalism these form a pillar of society that is celebrated in almost every other industry.  We’re all for innovation and trying different things when the current model isn’t working.

As a tech startup, we fully support the evolution of systems and being part of conversations and solutions that positively impact society.  Athletes, we’ve always got your back.