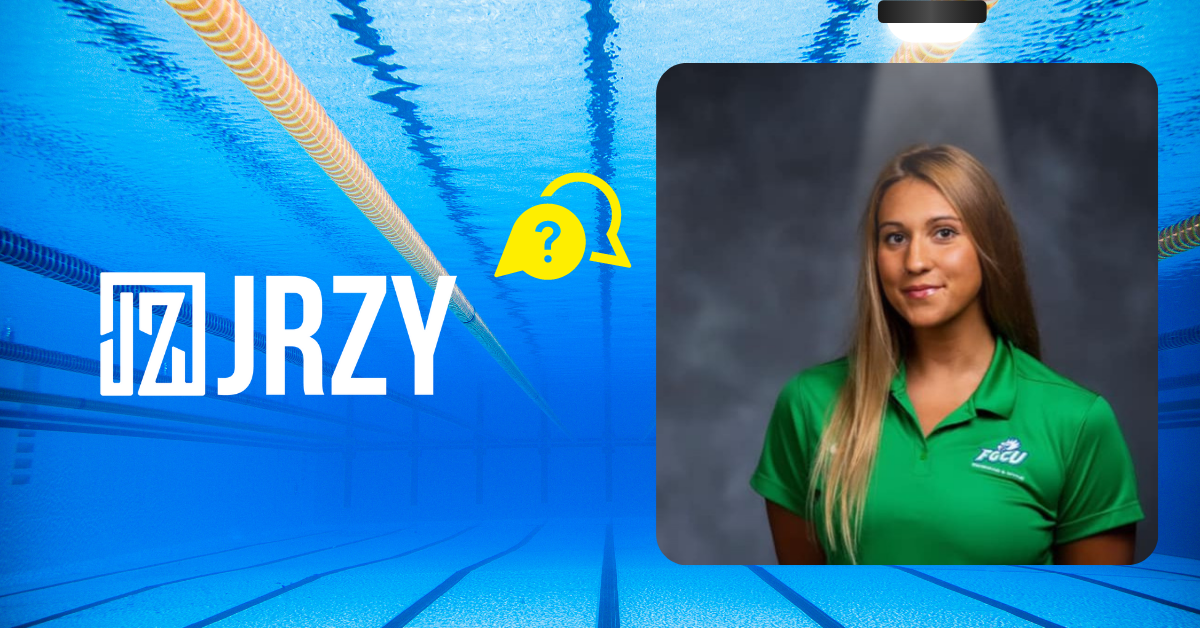 An Interview With Olympian Petra Halmai

If there’s one thing to take away from this interview about Petra, it’s that she’s determined to use her own journey to help others.

Here at JRZY, we’re proud to have a few Olympians who have joined our community.  Sadly, the Winter Olympics has just ended, but we still have the opportunity to learn from the experience of one of our own.  We hear about the successes of Olympians when they’re on NBC every two years, but we rarely hear the full story behind the person who competes for their country.

Because of this, I interviewed Petra Halmai, who swam for Hungary in the 2020 (i.e. 2021) Summer Olympics in Tokyo.  The conversation that we had was a little bit free flowing, so while I asked her direct questions and while I will quote her as much as possible, this is not written in a basic “Q&A” format, so as to reflect the nature of the conversation.  That said, quotes from Petra are bolded, because the words that she speaks should stand out the most.

After a brief introduction, I started the interview by asking Petra if she could take me back to the beginning of her swimming journey.  Petra opened up immediately and answered,

“I started at 6 or 7 years old… I just loved being in the water.  Like every athlete watching this sport, the dream was the Olympics.  But no one believed in me.”

Throughout the interview, I was struck by the same feeling over and over: I was amazed at Petra’s desire to consistently sacrifice, no matter how much she would have to give up.  This started at a young age, as Petra’s small village wouldn’t be able to support the dreams of a future Olympic swimmer: “I didn’t have much opportunity.  My town is a really small village, so I had to move to a bigger city… I think I was practicing about nine hours per day.”  As her childhood progressed, Petra realized that she’d have to move overseas to really hone her craft.  During our interview, she said something to me that I truly feel was a powerful line that every young athlete needs to listen to: “I started to receive offers to go to school in America, and I decided that I didn’t want to live my life as in ‘What if’?”

That said, this move provided a whole new set of challenges that many others wouldn’t be willing to face, let alone if they were practicing almost double-digit hours per day.  Petra spoke little English before deciding to go to FGCU (among 30 or so other schools), but

“I like challenging things.  I like to challenge myself.  I had many questions, but I didn’t understand their answers… but I didn’t have a choice.”

At FGCU, Petra thrived.  She started winning races, including a national championship in December 2020.  At that point, the Olympics were a possibility, as they had been delayed for a year due to the coronavirus pandemic.  She called that the most stressful moment of her career, because “If someone was faster than me, I’m out.”  That said, the stress was far from over.  In the Spring of 2021, Petra wasn’t able to get back into the United States because the government wasn’t processing her type of Visa at the time, so she had to stay home and prepare for the Olympics on her own, rather than in the pool and with the coaches that she had really used to become an Olympic-level swimmer for a few years.

In fact, Petra has a stressful story about finding out whether she made the team, and it might not end in the way you think.  “Well, I had to pick out my sizes for every type of clothing before even knowing if I had made it.  I did a photoshoot – everything.  It would have been so tough to do all that and then not make it.  Finally, I just saw my name on the Hungarian national team’s Facebook page.”

No, that wasn’t a typo.  Petra found out that she had made the Olympic team through a Facebook page.   She found out she was going to compete in the biggest sporting competition in the world in the same way that millennials find out that an old friend from high school is having a baby.

Petra then arrived in Japan only about four weeks before the Olympics started, and remember that the 2021 Olympic village was different from just about every previous year’s.  While Petra says there was some fun shopping in the village and there was a common camaraderie among all athletes, “Training camp was horrible.  We were tested every day, there was contact tracing… I was actually shut down for two days… we couldn’t even see the other sports or competitions.”

Of course, in line with the rest of her story, Petra had yet another obstacle thrown her way.  “Four days before the Olympics, I hurt my back, and I couldn’t get out of bed for two days.  I was really nervous.  I’ve been working my whole life for this, and I can’t get out of bed.”

How did Petra recover from this?  Well, this is where her story gets even more incredible:  Petra wants to use her experience to help others.  In addition to using a masseuse and physical therapy a ton, she also talked a ton to a sports psychologist.  She was too “worried what people will say” by her own admission.

This is why Petra has become such a strong advocate for mental health among athletes.

‍“I believe that talking to someone is just as helpful as going to practice.  This is the reason that I majored in psychology.  For an athlete, it’s maybe 30% physical and 70% mental.”

“I think I can hep other athletes with this, especially women athletes, because I know what they’re going through.  I know that so many women athletes feel like they’re not good enough.”

If there’s one thing to take away from this interview about Petra, it’s that she’s determined to use her own journey to help others.  Here’s how Petra describes her future life goals: “I’m an open person, I like to try new things, so you never know.  One day, I would like to be a psychologist.  Maybe family psych, child psych… I don’t plan to be a swim coach, but never say never, you know?  I want people to know me first, and then know that swim is extra.”

‍“An athlete is not an average person.  My whole day – how I’m sleeping, how I’m eating… it’s all about being an athlete.  I believe an athlete’s life is different from many others’.  I chose this life, and I chose these sacrifices for this life.”

I think this sums up Petra better than anything else.  She’s a person who has overcome more obstacles than most people twice her age have, and she’s very honest about the sacrifices that have to be made.  She wants to use this perspective to help others, and her likely future profession will reflect her desire to pay it forward.  In other words, she’s exactly the type of person that the Olympics wants in its competitions, and she’s exactly the kind of person who can show the whole world what an important, uplifting place that sports has in humanity and society.   The sport of swimming has made Petra the person that she is today, and that person is someone who wants to leave the world a better place than she’s left it.

It’s only right for me to end this piece on a quote from Petra, whom I asked for any general, final thoughts or advice to young athletes.  Here’s what she said:

‍“For younger athletes, you have to believe in yourself.  If you do, there are no limits.  Literally everyone told me I was not going to make it.  I was the only one who believed in myself.”

Petra can be found on JRZY and at halmai_petra on Instagram. She hopes to swim again in the 2024 Summer Olympics.

At JRZY, we’ll all be rooting for her.