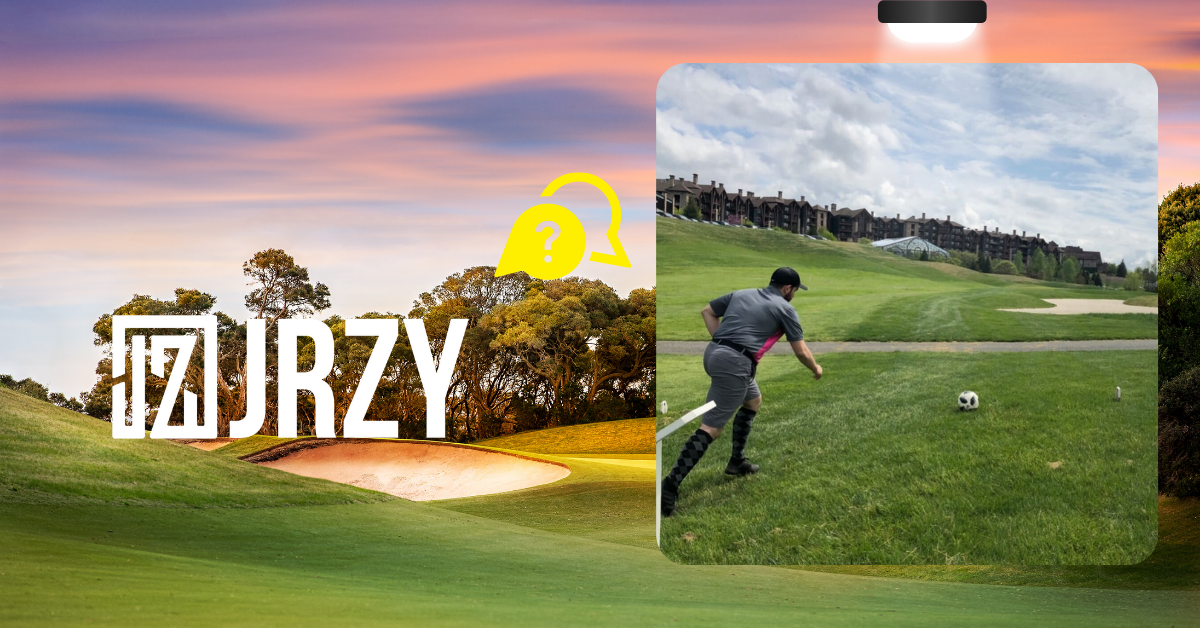 JRZY is extremely thrilled to have Angelo Messina as one of our athletes on our Athlete Advisory Board. By day he is a chemistry teacher for grades 6-12 and on nights and weekends he is a professional footgolf athlete from Long Island. Angelo works hard everyday to achieve his dream of becoming a paid and sponsored professional athlete.

JRZY is extremely thrilled to have Angelo Messina as one of our athletes on our Athlete Advisory Board. By day he is a chemistry teacher for grades 6-12 and on nights and weekends he is a professional footgolf athlete from Long Island. Angelo works hard everyday to achieve his dream of becoming a paid and sponsored professional athlete.

As the name suggests, Footgolf is made by combining football and golf. It is a sport in which players kick a soccer ball into a cup in as few shots as possible. It has gained its popularity over the past few years due to its novelty, inclusiveness, and unique qualities.

How did you get into footgolf? When Angelo was younger, his dream was to become a professional soccer player, but as he got older, it became less of a reality for him. Senior year of college he had some tryouts, which didn’t end up panning out. Later, he got injured and was out for some time. However, all of this seemed to happen for a reason. Messina later discovered “football” on a golf course. He went in full with determination and drive, and his once dream of becoming a professional soccer player became a reality of endeavors to become a professional football player.

Where do you compete? Messina ventured to Memphis April 8th for a regional footgolf tournament to see if he could get in the player pool for the USA national team. Messina went into the tournament blind, as this was the first time he played Footgolf on a real course before. He had an indelible experience, as he was able to play on a really cool course and even meet some incredible people on the national team. While the tournament did not turn out exactly as he had liked, he provided thoughtful advice and told his inspirational story on how to keep yourself motivated even when things don't always work out the way they were planned, because that’s just life.

What type of training and preparation is necessary? Just how much work is necessary for playing at a footgolf tournament and what kind of training do you do? Angelo answered that he would definitely change his training, as he felt faced with challenges when it came to training due to various weather circumstances. Being from New York, it gets quite brisk and snowy in the winter, and Messina found it challenging to practice in these conditions. He felt that he would have performed better if he had begun his training and working out at the gym earlier to help his stamina and endurance when it came to the later rounds of the footgolf tournament. Working out at the gym for him is a crucial part in his routine to help keep him in shape and motivated.

What are your pre-game rituals? I am always curious to see if athletes have any special rituals that they do before a big game or anything that gets them especially motivated. While some people have lucky socks, Messina has double. He always wears two compression socks, which is most comfortable for him and also helps him play to the best of his abilities. Something that helps him get into the game-day mode is music. Some athletes have specific game-day/workout playlists, Messina always listens to whatever music he is feeling at the moment. Sometimes that is country, hip-hop, rap, even Italian music - it really depends on his mood. His current hype up song is “Face off” with Tech n9ne and The Rock. Lastly, he always likes to get a feel of where he is playing, so he will usually go to the course and find the first hole, and then kick the ball around with his friends/teammates. Getting a feel of where he is playing really helps him feel more comfortable and confident on the course.

What have you learned most from your most recent competition? The biggest takeaway is that you are your own worst enemy, but also your biggest cheerleader. On day one of the tournament, he did not do as well as he had hoped, but he was able to turn it around on day two. He felt he was a little inconsistent in some of the poles, but later in the upper poles he received par or better. How he got a better score on day two was to refocus his energy on the present and not worry about his mistakes because you cannot change the past. Athletes often have so much pressure put on them, and pushing yourself to remain optimistic in a tough situation can really go a long way. Throughout his career, he has taught himself to be more level-minded, take it one step at a time, and realize that no matter what, it is always upwards and forwards.

What was especially inspiring to me was Messina’s advice to other athletes. While he believes it to be a cheesy statement, he lives by the expression Hakuna Matata, the Swahili phrase popularly known from Lion King translating as “no worries.” He has followed this motto since he was in high school. He explained that no matter what kind of athlete you are - casual, amateur, professional, etc. - we are all athletes.

In each sport, you are making the same motions for your sport. “You learn from your mistakes, you get help if you need it, and keep going to see how you can get to the next point. You can achieve anything.” Messina concluded by saying that hard-work, dedication, and turning your mistakes into a positive learning experience will get you exactly where you need to be.

‍Let’s wish Messina the best of luck as he continues to play in Maryland next month and New Jersey in August!