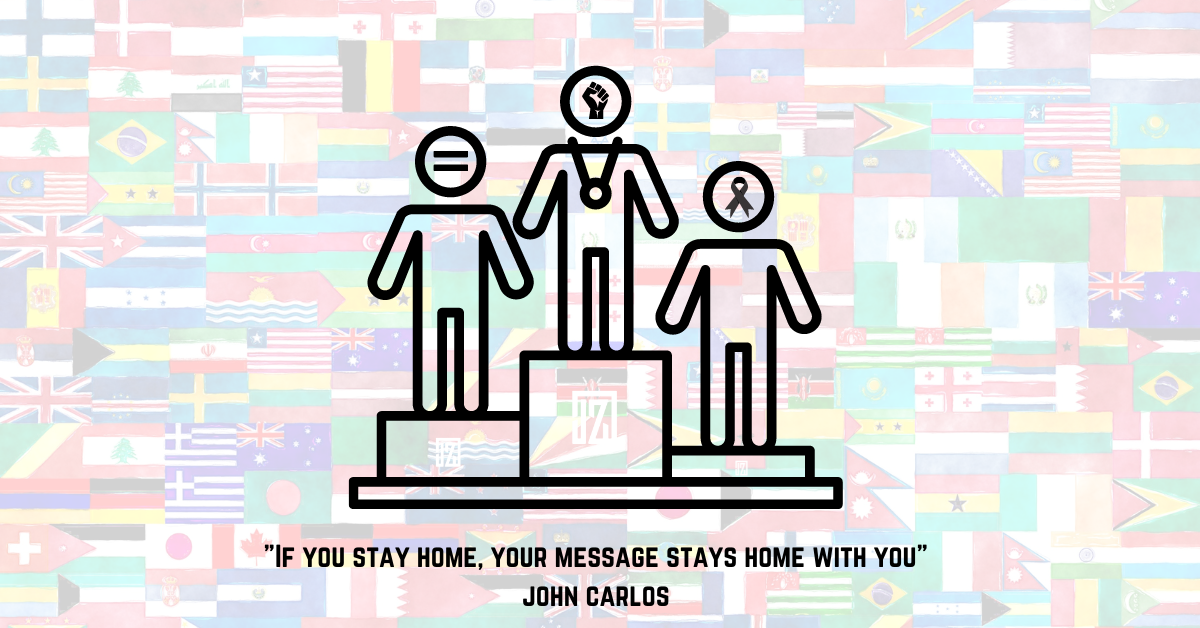 By
Team JRZY
on
September 25, 2022
Category:
Impact Of Sports

This February marks another Winter Olympics, and it comes at a significant time for not only the sports world, but the whole world in general.  President Biden has announced a diplomatic boycott of the Olympics for Americans, meaning that American athletes will compete but the United States will have no political or governmental presence at the Games.  At JRZY, we’re thrilled that the athletes get to realize the dreams that they’ve had their whole lives, but it’s clear that these Winter Games aren’t just about the games this year.

“If you stay home, your message stays home with you.”  That’s a quote from John Carlos, who, along with Tommie Smith, raised his fist in a Black Power salute on the winners’ podium at the 1968 Summer Olympics in the 200m sprints.  That year has often been cited as the most tumultuous in America since Abraham Lincoln’s presidency… though it seems like 2020 got close.  In 2020, we not only faced a once-in-a-century pandemic, but there was also the George Floyd murder and the subsequent riots, and there was a toxic presidential election that was fueled with, well, toxicity.

The summer of 2020 also saw the NBA Bubble in Orlando for the playoffs, and the players embodied John Carlos’ famous quote.  There were some calls to leave the bubble to protest racial violence, especially after the Milwaukee Bucks chose to boycott a game following Jacob Blake’s death in Wisconsin.  According to ESPN’s Marc Spears, Jaylen Brown (who was only 23 at the time) challenged his fellow players, saying: "OK, if you guys leave here, are you just gonna leave and go chill and hang out with your families and lose that loneliness?... Or are you going to be in the trenches?  Are you going to be in the streets?”  The players decided to stay and try to keep using the publicity of the bubble to deliver their strong messages to the country about where we need to improve.

Nowadays, we’re in the golden age of athletes using their platform to promote social good.  If you’ve been following JRZY for awhile, you won’t be surprised to know that we couldn’t support this any more strongly.  This February marks a critical time for sports in America.  There’s the Olympic diplomatic boycott due to China’s treatment of Uyghur citizens, as a November report from the U.S. Holocaust Memorial Museum stated that China’s actions may amount to a genocide.  It’s also Black History Month, and there’s the a voting rights bill in Congress that looks like it’s somehow unlikely to pass.  (Nobody here wants to get too political… but are we really still fighting about Voting Rights as a society? Really?)  The NBA has always been a major proponent of Black History Month, and it shouldn’t surprise anyone if the NBA uses its voice loudly this February, considering all that’s going on.

And this is why we’re talking about Tommie Smith and John Carlos here at JRZY.  Long before social media, long before the NBA Bubble, and long before Colin Kaepernick first took a knee during the national anthem, Smith and Carlos were using their platform to send a societal message that they felt the world needed to hear.  Given that we’re a company who embraces athletes using their voices to improve the world, we think that our sports culture in general owes a great deal of gratitude to Tommie Smith and John Carlos.

That’s why they will be the inspiration for a few blogs that you’ll see on this site from different writers.  Each writer will tell you how we individually draw inspiration from Smith and Carlos in 1968, and we’ll explain how their move embodies our passion for athletes using their voices.  Each blog may take a different form or different angle, but that’s the general theme.  Every athlete is unique, and we have unique voices.  That’s why your message can’t stay home – the world is missing out on hearing a message that they couldn’t hear from anyone except you.