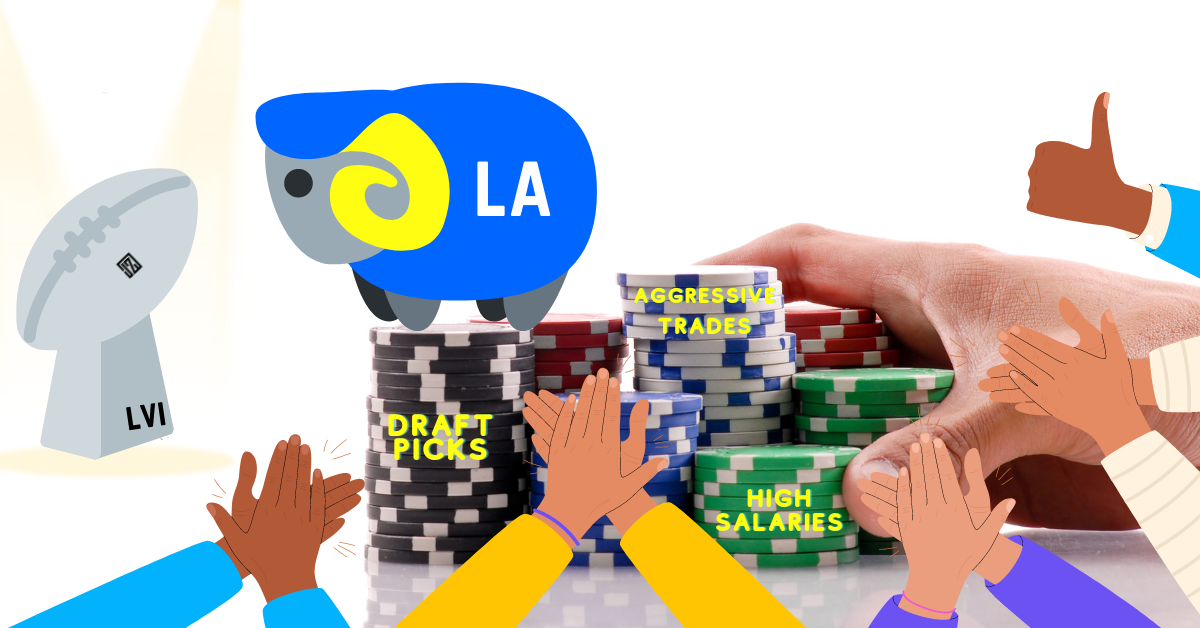 Why I’m Rooting For The Rams

I’m rooting for the Rams, because there’s one thing that I love more than a team like the Bengals winning: A team pushing all their chips into the middle.

Let me admit that it would be such a cool story to see the Cincinnati Bengals win the Super Bowl.  They’re a small-market team who has never won the Super Bowl, and they’d be the ultimate Cinderella story.  Among my group of 10 friends, we do an NFL wins pool in which we all select three teams with pre-determined draft picks, and whoever’s three teams has the most wins at the end of the regular season wins all the money.  The guy who won this year did so because he picked the Bengals at 27.  So yeah, it would be awesome to see the Bengals win.

But I’m rooting for the Rams, because there’s one thing that I love more than a team like the Bengals winning: A team pushing all their chips into the middle.

That’s what the Rams have done this year.  They traded Jared Goff and a few picks to upgrade to Matthew Stafford, a few more picks in 2019 for Jalen Ramsey, and they overpaid for Von Miller during this season.  They even traded the Patriots a late round draft pick for a running back who probably would’ve fallen to 3rd (at best) on the Pats’ depth chart.  Les Snead, the Rams’ GM, actually has a coffee mug that says “%&** them picks” that he uses in the team facilities.

At JRZY, we’re a pro-player organization in every way, and what’s cooler than being a player where your organization is all in for a year?  Too often, we’ve seen teams in the past like “The Process” 76ers in the mid-2010’s.  I do not blame the organization at all for employing such a strategy in league that rewards terrible play with better draft picks, but man, it must be horrible as a player to be in this kind of environment.  You’re playing your heart out to win every game, and your bosses in the front office are doing the exact opposite?

This is why I was rooting for the 2019 Raptors, who had pushed their chips into the middle for Kawhi Leonard.  It was why I was rooting for the Milwaukee Bucks in last year’s finals, as they had admittedly overpaid with three players and two 1st-round picks for Jrue Holiday.  They said, “Who cares if we’re overpaying – banners fly forever.”  And now the 2021 banner flies forever.

When teams go full throttle for a season or two, this is what sports are all about.  Going for a ring with everything you’ve got and no regards for anything else.  I want the Rams to be rewarded for looking the dealer straight in the face and saying “All-in” while pushing their chip stack to the middle.  They’re going to be absolutely horrendous in the mid-2020’s, but if Stafford, Ramsey, Cooper Kupp, Odell Beckham Jr., and Aaron Donald get their first ever ring on their finger, then it’ll all be worth it.  Go Rams.